Gratin Expectations and a Bonus Salsa 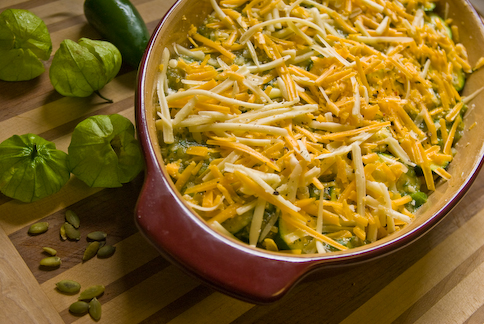 We have a crew of friends, creatively referred to as the “Brunch Bunch,” who get together almost every month for… what else?… brunch. It’s always potluck-style, and it’s always replete with lotsa mimosas (usually feat. champagne by the talented winemakers over at Cook’s and/or Andre).

This last Sunday, my friend Melissa observed: “Usually you’ll go to a potluck at someone’s house and there will be Ruffles and crap like that. Not with this crew. You don’t show up unless you have good food.”

Does that make us food snobs? If so, then I am totally bringing Ruffles to the next get-together. Regardless, at this brunch, we enjoyed Melissa’s pumpkin bread, Matt and Eliese’s sausage strata, Laura and Mark’s corn cakes with avocado sauce, Angel’s roasted vegetable quiche/galette, Rachel’s sourdough pancakes, et cetera, et cetera… and this summer squash gratin with fresh tomatillo salsa.

This is the first year I’ve grown tomatillos, and apparently they have no objection to Portland’s schizophrenic summer weather. Had I known they would do so well under my indifferent gardening supervision, I would’ve planted three times as many. As it is, I don’t think I’ll have quite enough to can, alas.

Tomatillo salsa is incredibly versatile and easy to make. It’s great in (or on) enchiladas, drizzled over carnitas, or served in a big bowl all by itself. This recipe is a pretty faithful rendition of Rick Bayless’ recipe from Authentic Mexican: Regional Cooking from the Heart of Mexico

, the only Mexican cookbook one should ever really need.

Bring about a quart of salted water to a boil. Add the tomatillos and cook until barely tender, probably 6 to 8 minutes, depending on their size. Drain and place in the bowl of a food processor (or jar of a blender).

While the tomatillos are cooking, prep the jalapenos: Seed them if you fear heat; leave the seeds in if heat is cool with you; roughly chop; add to food processor or blender along with cilantro, onion and salt.

Process or blend in several short pulses until mixture is rendered into a coarse puree. You may need to scrape down the sides occasionally, especially if using a blender.

If serving as a fresh salsa, stir in a quarter cup or so of water. Set aside and allow flavors to mellow/marry/mature for about 30 minutes before serving. (If using in another dish, don’t worry about this last step.)

When you’ve got plenty of salsa on hand, go ahead and turn it into something yummy like

Grease a gratin dish or other baking dish with 1 Tbsp or so oil (I prefer peanut oil).

Slice four zucchini (or so) into thin coins. Cook them, preferably by roasting, though steaming would also be OK. Pat them thoroughly dry afterwards if you steam them.

Layer ingredients in pan in this order: zucchini, a sprinkle of salt and pepper, some salsa, some cheese, zucchini, more S&P, more salsa, the last of the cheese.

Bake at 375 for 25 minutes, or until cheese is melty and bubbly and beginning to brown.

Writer, cook and trivia/spelling bee hostess, living it up in North Portland.
View all posts by Molly Newman →
This entry was posted in Recipes, Vegetarian. Bookmark the permalink.

3 Responses to Gratin Expectations and a Bonus Salsa